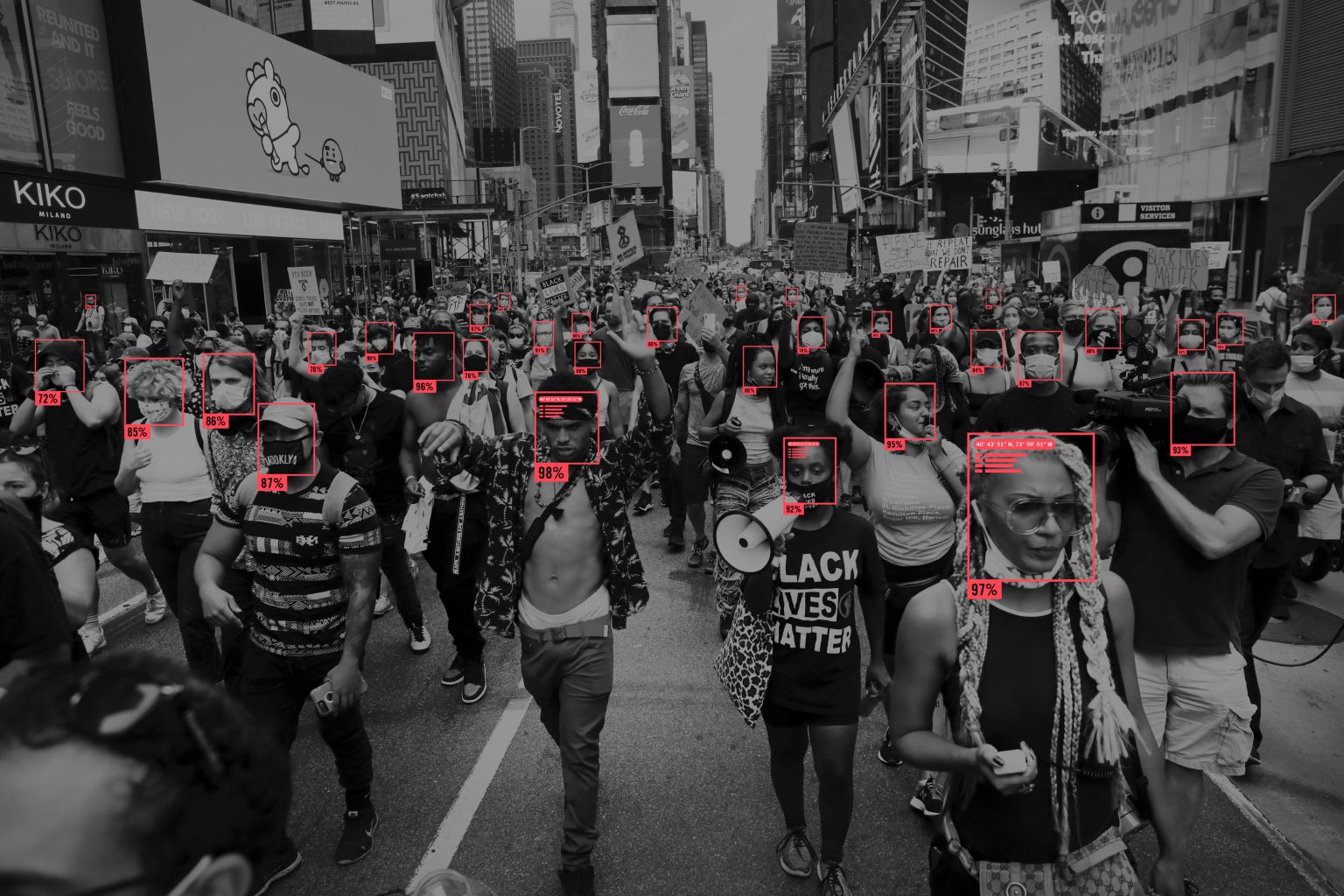 This cannot continue. We must ban the scan.

To help bring about a ban on police use of facial recognition technology, in mid-2021 Amnesty International launched an ambitious effort, Decode Surveillance NYC. The effort mobilised thousands of digital volunteers to find and categorise CCTV cameras throughout the city. We then worked with data scientists, geographers, and 3D modellers to analyse the crowdsourced data.

Our analysis of the Decode Surveillance NYC data reveals an expansive, invasive and discriminatory surveillance machine at the core of the NYPD’s policing tactics.

Facial recognition for identification is mass surveillance and is incompatible with the rights to privacy, equality, and freedom of assembly. In order to ban police use of this dangerous and discriminatory technology and protect our communities, we need you and your community to write to your New York council member, demanding the introduction of a bill that prohibits police use of facial recognition.

If you do not live in New York City, you can sign our global petition calling for a ban on the use of facial recognition for mass surveillance by state agencies and private sector actors across the globe. 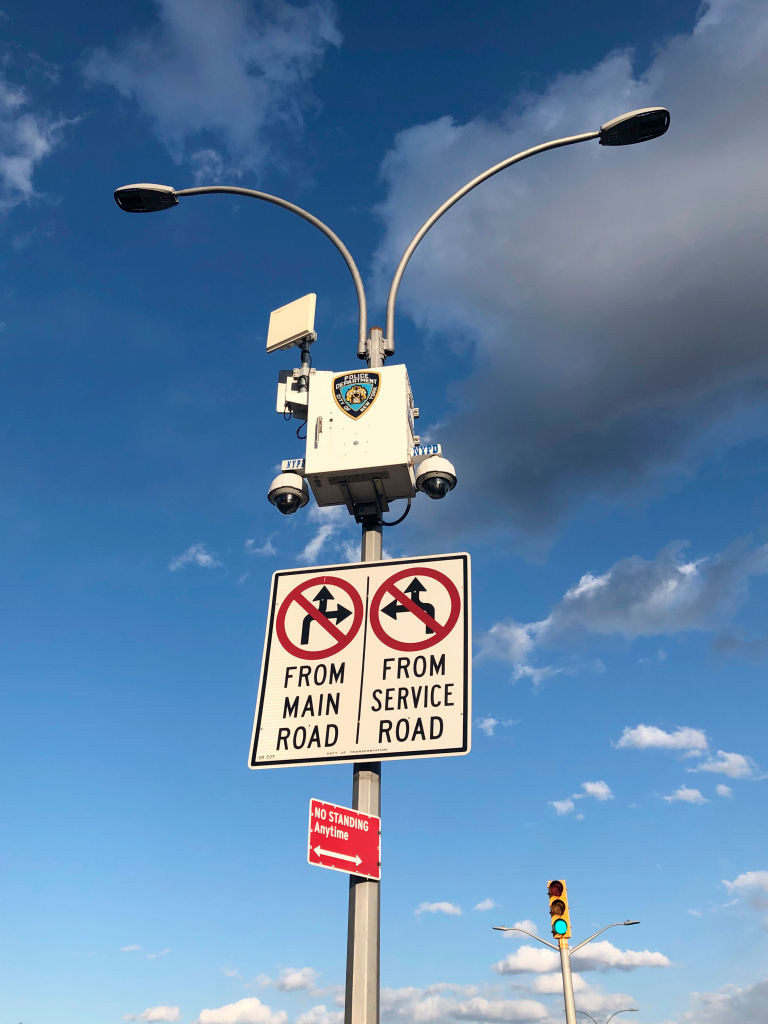 Government agencies’ use of facial recognition disproportionately impacts Black and Brown people because they are at greater risk of being misidentified and so falsely arrested. Even when accurate, facial recognition is harmful – law enforcement agencies with problematic records on racial discrimination, are able to use facial recognition software, to double down on existing targeted practices. In March 2021, for instance, New York’s Police Commissioner apologised for the NYPD’s legacy of racialised policing.

This correlation points to the existence of a persistent form of ‘digital frisking’ that exceeds the boundaries of physical stop-and-frisk. Digital frisking means that certain neighbourhoods are at greater risk of being exposed to facial recognition than others. It means that the effect of policing tactics, such as stop-and-frisk, endure beyond the singular stop-and-frisk incident itself, as communities are constantly intercepted by the NYPD’s surveillance machine.

In the Bronx, Brooklyn and Queens, the analysis also showed that the higher the proportion of non-white residents, the higher the concentration of facial recognition compatible CCTV cameras.

Our analysis comes on the back of research published by the New York Civil Liberties Union in 2019, analysing “stop-and-frisk” incidents across New York City. At the height of the practice in 2011, they found that approximately nine out of 10 frisked individuals were innocent – in that year, the majority of those frisked (53%) were Black. Their data for 2019 showed that in the majority of incidents of frisks (66%) the person stopped was ultimately innocent. Moreover, 59% of these incidents involved Black individuals. The latest data for 2020 continues to show the same trend. 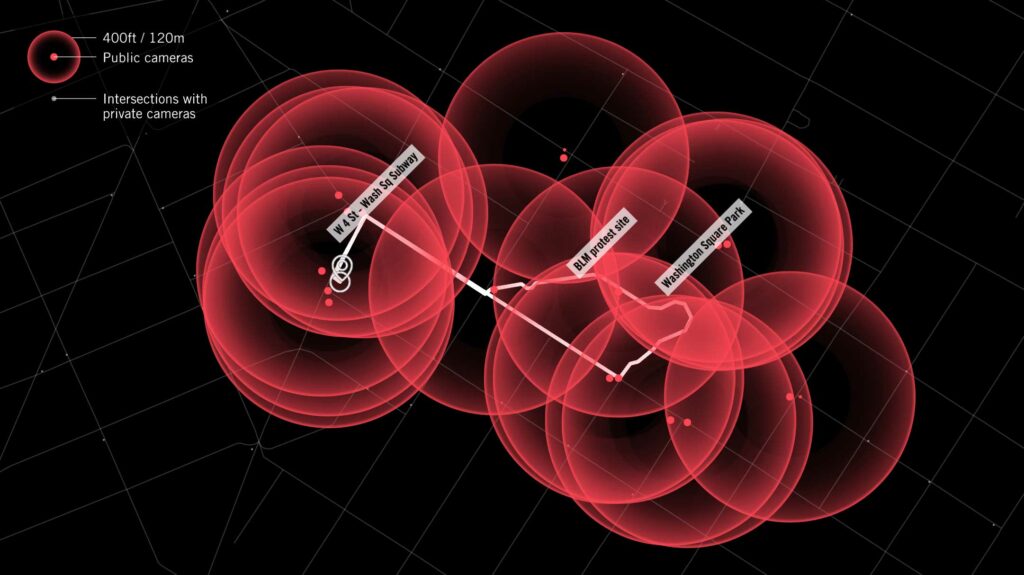 During the Black Lives Matter (BLM) movement of mid-2020, New Yorkers attending protests experienced higher levels of exposure to facial recognition. For example, a protester walking from the nearest subway station to Washington Square Park could be under surveillance by NYPD Argus cameras for the entirety of their route.

The NYPD uses a surveillance system developed by Microsoft, known as the Domain Awareness System, which gives police officers access to an estimated 20,000 feeds from public and private cameras. These feeds, when combined with other cameras and facial recognition software, can be used to track the face of any individual in New York City.

To establish the extent of this, we plotted our camera data against BLM protest sites from mid-2020, including Times Square and the Theatre District, New York City Hall and Washington Square Park in Manhattan, and Barclays Center in Brooklyn. 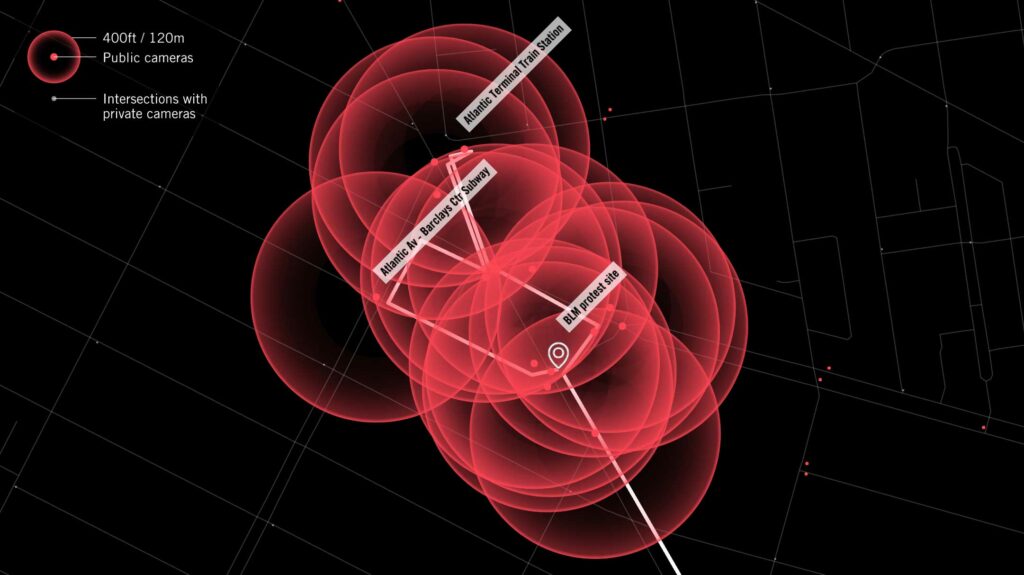 For this case study, we focused on the public NYPD-operated Argus dome cameras identified in the Decode Surveillance NYC project, excluding private cameras. Since the camera is most likely varifocal and has a range of 134–148 mm, assuming a 4k resolution (equivalent to 22x optical zoom), it can capture detail such as faces for up to approximately 120 metres away (or approximately the length of one block). This helped us understand the radius of exposure for each camera found at protest sites.

Technologies of mass surveillance risk dissuading protest as people fear being identified, tracked, harassed and persecuted, simply by exercising their right to freedom of assembly. In other words, pervasive facial recognition leads to a chilling effect on citizens’ ability to exercise their most basic rights. Their deployment at Black Lives Matter protests against the backdrop of the intensified fight for racial justice is a stark warning of how this technology continues to affect Black and Brown communities in particular. The case of Black Lives Matter activist Derrick ‘Dwreck’ Ingram, whose apartment was besieged by NYPD officers after he was targeted with facial recognition technology at a protest, is just one example of the harassment Black protesters risk facing through the use of facial recognition. 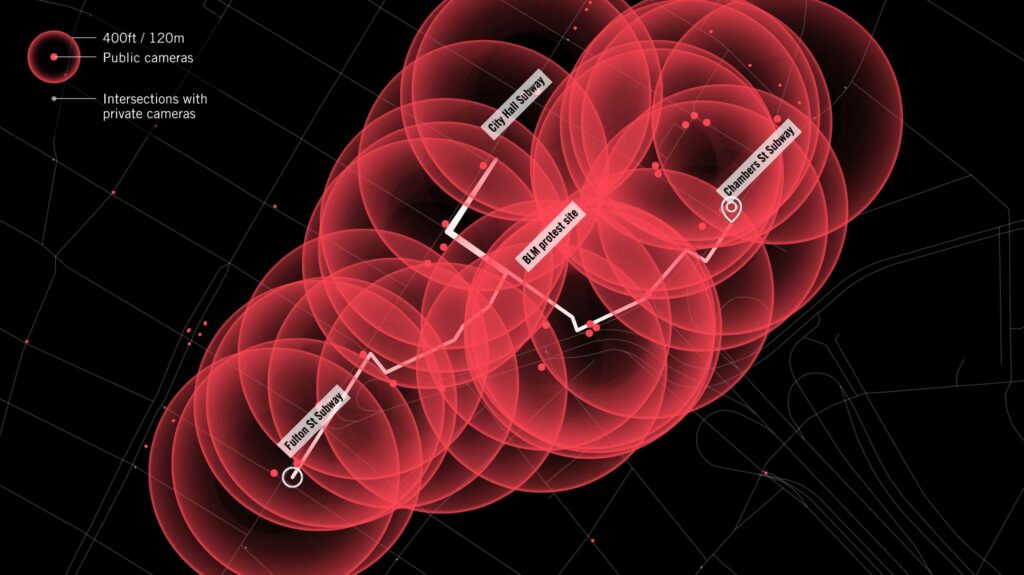 At New York City Hall, where protesters occupied the front lawn of the building from 23–30 June 2020, people arriving and leaving the protest were potentially exposed to facial recognition for 100% of their route.
Likewise, at Barclays Center in Brooklyn, where a high concentration of BLM protests also took place, approximately 95% of the route sampled by Amnesty International was surveilled by facial recognition compatible CCTV cameras. Meanwhile, a protester marching in Times Square would have risked surveillance via facial recognition for 100% of their route.

Facial recognition technologies are used to stifle protest and harass minority communities around the world – not just in New York City. These technologies are a global threat to the right to privacy, freedom of peaceful assembly and expression, and to equality and non-discrimination. Call for an end to technologies of mass surveillance.

Amnesty International would like to thank the more than 7,000 digital volunteers from around the world who analysed every intersection in New York City to find and categorise surveillance cameras, gave invaluable feedback and peer-to-peer support. Without you this research would not have been possible, thank you.